I will always remember the day that I drove away from the hospital with my newborn knowing that she just failed the hearing test again and had a high likelihood of a mild to moderate loss. I looked at her, thrilled to be taking a baby home after suffering a loss two years prior. I knew that she would have to deal with this hearing loss her whole life, but I wouldn’t let it define her and I most certainly would make it her super power. That is exactly what I have tried to do every day since.

My older sister has a bilateral hearing loss nearly identical to Kacey’s. Growing up in the 80’s and 90’s, she tried to hide it. She thought that it made her less than whole. We shared a room growing up, and many nights she would cry to me about how she thought no one would ever love her. I could never understand why it was that big of a deal. Yes, she had a hearing loss and she wore hearing aids but she was so much more than that. As a little sister, I thought that she was perfect in every way. When my daughter was diagnosed with the same loss my mind automatically went to how my sister felt about herself when she was little. I never wanted Kacey to feel that way. 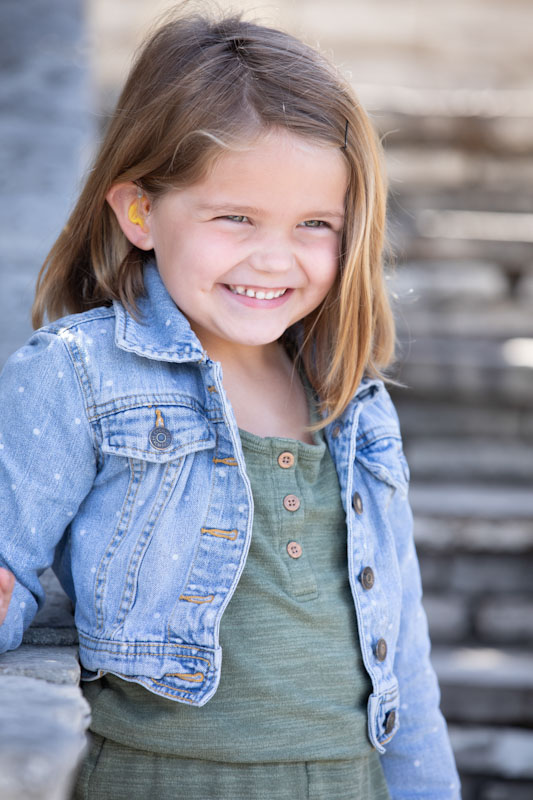 From the very beginning I chose to empower Kacey. I have taught her all about her hearing. I have let her know that she is strong and brave because every day she wakes up and has to do and go through things that a lot of other kids don’t have to think about. I have let her pick out the colors for her hearing aids and earmolds. When she picks out the loudest colors, it makes me smile. She wears hearing aid charms from Purple Cat Hearing Aid Charms and we have made some of our own. They show her personality and help her to embrace who she is. My sister still covers up her ears with her hair as she always has. I pull Kacey’s hair up all the time and when people ask about her hearing aids, we tell them what they are with confidence. In the last year, the American Girl Company came out with a doll named Joss who is deaf in one ear. We got Kacey a doll for her birthday. She was so excited. We have seen more and more deaf people on television and interpreters at many news events. Many of our children’s books have kids with disabilities and some use hearing aids. We even learned the Pledge of Allegiance in ASL after watching it at the presidential inauguration. All of these things help Kacey to feel proud of who she is. When she draws pictures of herself, she draws her hearing aids, and she puts hearing aids on her dolls and stuffed animals. I see this when she shows off her charms to her friends. I see this confidence in her identity when she lights up after seeing others with hearing aids or using sign language.

This last January, we ran the California Hands & Voices 5k. I let her know it was to support other kids who were deaf/hard of hearing. She was all in once she knew that. I feel like everything we can do to embrace who she is will lead her to great things. I know we have a long way to go but I truly believe that Kacey knows who she is and what she represents and that is a strong, kind, brave, wonderful kid. 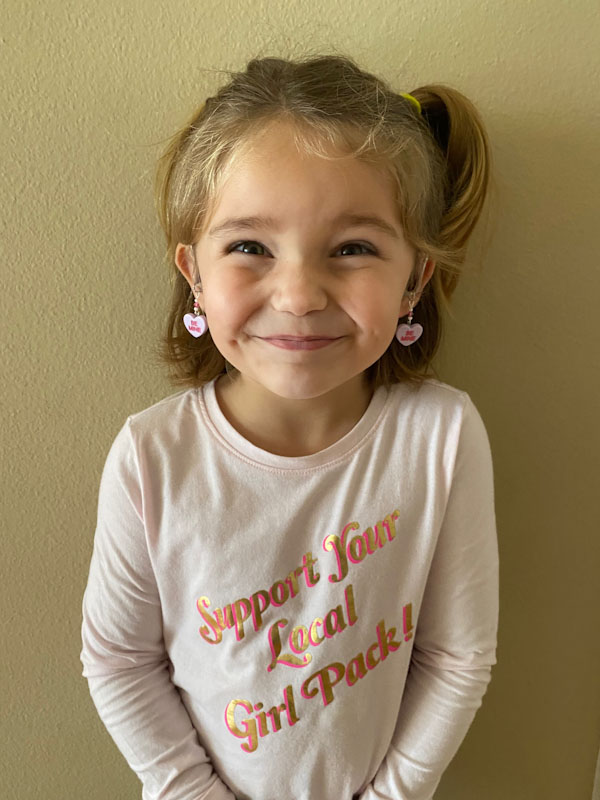