Here in Sacramento we have a claim to fame - we have Sean Esson, a Deaflympics Gold Medal Snowboarder! I had the privilege of interviewing Sean on January 14, 2020, and he told me his amazing story.

But because I know that not all of you will read this article to the end, I am going to start where Sean ended - with a plea to all of you to support the Deaflympics athletes. The Deaf athletes struggle for funding. Some countries pay their Olympic athletes, but the United States does not. Yet, hearing athletes in the Olympics and the Paralympics (which collaborate now) get lots of corporate sponsors. The Deaflympics, while under the umbrella of the Olympics, is still separate, so the sponsorships don’t come. The Deaf athletes have to pay for their own travel, food, lodging, competition fees, etc. and it is HARD. Please, please consider sponsoring the Deaflympics by going to their website.

When Sean was 13, he tried skiing for the first time, and found it super-easy. Then, when Sean was 15 and his brother was 7, the boys tried snowboarding. They found snowboarding challenging, and they wanted to get better. They went back for one week the next year, and continued to improve their skills.

When he was 17, Sean got his driver’s license and was able to drive himself to the snow! His high school had block scheduling, and Sean was off on the last class of the day and would go to Boreal until 9:00 p.m. and other resorts on the weekend. Then college happened. Sean went to Cal State Northridge (CSUN). The closest snow area was Big Bear. But Sean was broke, and couldn’t afford to go. On his 6-week winter break, he went to Boreal, and he was offered a job as a snowboarding instructor. He taught in the morning, and then snowboarded in the afternoons and evenings. He fell in love with it, and did not want to go back to school. He did go back, but was depressed. He went up to Boreal as often as he could, and finally, he left school.

In 2007, he went with friends to snowboard in Park City, Utah, and saw lots of Deaf people! He found out the Deaflympics were being held in Salt Lake City. He did some research to find out how to get involved. The next year, he and his Deaf brother both went to “development weekend” in Aspen, Colorado. People were blown away when they saw him and his brother snowboarding. They asked, “Where have you been?” The next year, they went to training at Mt. Hood, and then to tryouts in Park City. Sean and his brother were on the team! 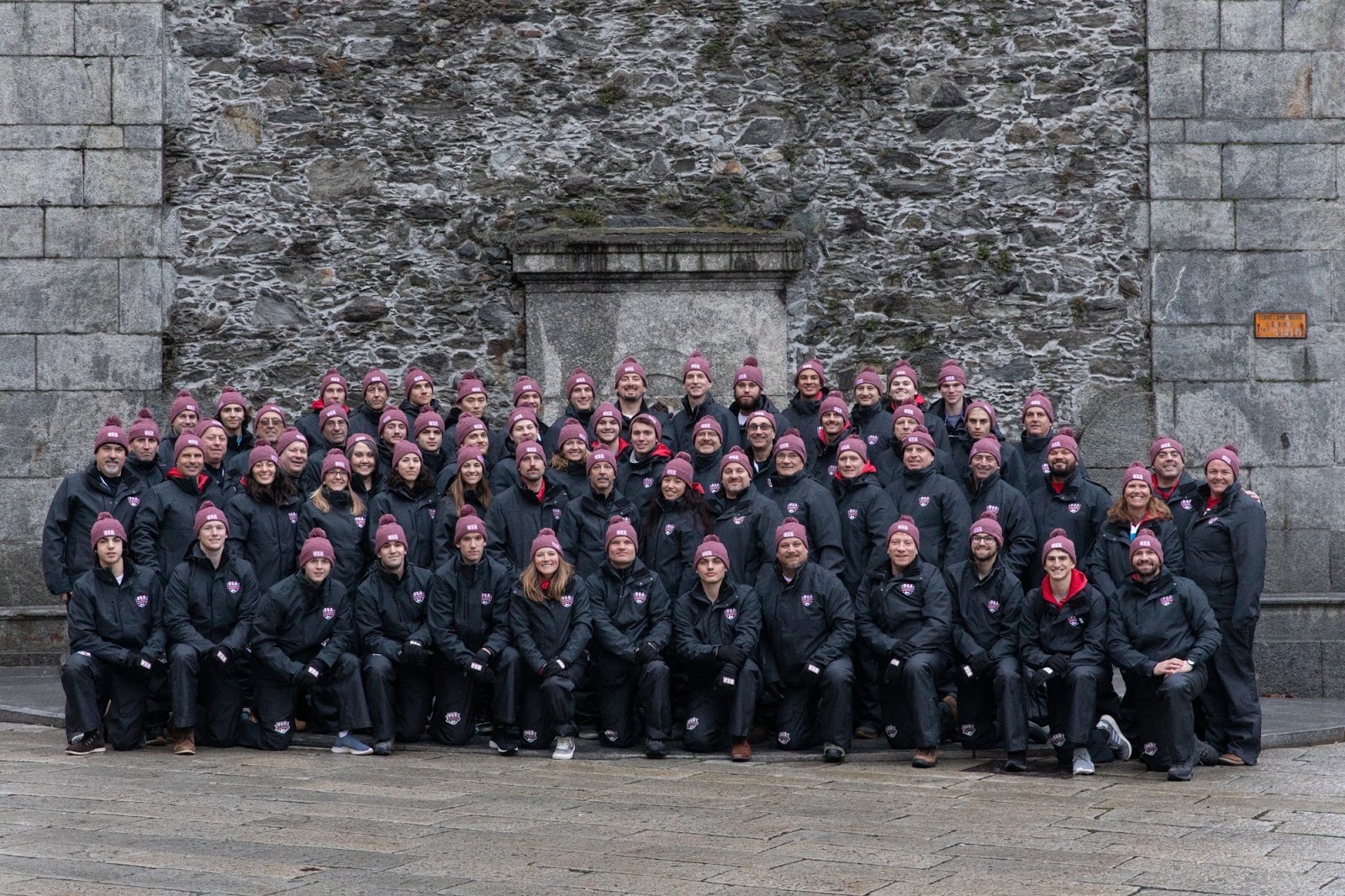 In 2011, the Deaflympics were supposed to be in Slovakia. Everyone was so excited, but three days before they were supposed to fly out, they received an e-mail, saying the Deaflympics were canceled! There had been a scandal - the person in charge of the Deaflympics had taken all the money and left the country! It was very depressing. Sean was embarrassed, because people had donated money for his trip. In 2012, the European Deaf Sports Organisation invited the Americans to their European Championship in Finland, so Sean went. He was the sole representative for America. People were really impressed with his skills during practice, but in the end, he did not compete well. He had so much fun meeting many Deaf people who shared his passion for snowboarding, that he had socialized too much, and was tired by the time competition happened. It was a great experience for him - he met many people - but he also learned to control himself and know that he had to eat right, get enough sleep, and maintain his strength for competition. He was ready for the next Olympics!

Russia had committed to hosting the 2015 Deaflympics. The USA Deaf Sports Federation (USADSF) contacted Sean to see if he was interested in competing. He was accepted on the team, and so was his younger brother. Sean was a coach, as well as an athlete. He wasn’t sure what to expect, and felt a little like he had been thrown into a “den of wolves,” but he had competition experience and he learned fast. The Deaflympics at Khanty-Minsiysk, Siberia, were beautiful. The site had previously hosted hearing world championships, so the venues were all set up. Sean competed in the “slope-style”event (jumping over rails), and got THIRD PLACE - His brother got FIRST! In the “half-pipe”event, Sean got SECOND PLACE, and his brother got FIRST. (Sean said his brother is really good, because he started when he was seven years old.) In the next event, “border-cross”, Sean got knocked out in the first round, but his brother got SECOND PLACE. So, the Esson brothers got FIVE MEDALS, and were quite famous. Sean was not expecting to be in the “spotlight”, but he was!

The next Deaflympics became a problem. One country volunteered to host, but then dropped out. Another country volunteered, but dropped out. Finally, with only one year left, Italy accepted the host responsibilities. Everything had to be rushed, to keep the Deaflympics in 2019, and keep the event on its 4-year cycle. Italy started planning in January, and decided the Deaflympics could happen in December IF there was enough snow - that was a gamble! With one year to prepare, the USA snowboarding team had to struggle. Sean wore many hats! He took on responsibility of recruitment, development, fund-raising, planning, etc. It was overwhelming. Luckily, he found a person had knowledge and skills; Sean was able to hand over those responsibilities so he could focus on team training. The team went to Colorado to practice for three days, and it went well. Then Lake Tahoe and Mammoth had snow, and the team was able to get more practice. At the same time, Sean was trying to balance his snowboarding life with his personal life - he was married, they had a young daughter, and his wife was pregnant. Sean was also working on his Deaf Education credential, and doing student teaching.

But all was managed! The team went to Italy, which was beautiful! BUT, the mountain did not have enough snow for the “slope-style” and the “big air” (in place of the half-pipe) competitions, and those events had to be moved to a different mountain two hours away. So the team had a day of training; the next day they competed in the “border-cross”. The team did not do very well in “border-cross” but it did OK. That event was mostly for fun. That night, they were driven to another mountain, where they had one day of training, and then two days of competition. AND it was raining. The whole team was exhausted and stressed. In training, Sean did not do well; plus, he was still the coach. The girls’ team was very stressed, because they did not have a lot of competition experience. And one guy on the team hurt his knee and had to go to the hospital. That added to the team’s stress.

The next morning the team had time to practice before the competition, and practice went well. Then came the competition. In the “slope style”, competitors had three “runs” and the best run wins. Sean felt his second run was really good, but his “hot” competitors were three athletes from Russia, who also did really well. Sean was hoping for a medal, but he was afraid the Russian snowboarders would beat him. He was excited, but also stressed and PANICKED! The results were not announced for two hours, because of the difficulties with the move to a new mountain. But in the end, PAH! SEAN WON THE GOLD MEDAL!!! AMERICA WON! Sean was so emotional, broken down, exhausted, stressed. His head was exploding! He thought - finally, all that training paid off, while working to find balance with his personal life. He called his wife, Cheryl, to tell her, even though it was 3:00 in the morning here in Sacramento.

The girls did well, too. One woman had won GOLD. And the guy who had hurt his knee came back to cheer for his team. The last day was the “big air” competition. Sean had one good run, and was hoping to score in the top three, but when the announcements were made, the Russians had won all of the medals. Then, it was discovered there had been a mistake. Sean had won third place. He was happy, but he didn’t like the feeling that he had replaced the Russian man who thought he had won third place. The women had done really well. They won SILVER and BRONZE.

A Little About Sean’s Background

Sean started home-based speech therapy when he was three years old. At five, he was enrolled in a Special Day Class for Deaf children in the San Juan Unified School District. He was there for two years; then, he was transferred and mainstreamed, alone, at Placer Elementary School. He was there until the 8th grade, with an interpreter who used S.E.E. Signs. He got pull-out services from a teacher of the Deaf two days a week. When he was 15, just before he started going to Del Oro High School, he received a cochlear implant. He did not have his Deaf identity yet, and he would refer to himself as “hard of hearing” or “hearing impaired” or as having a “hearing problem”.

When Sean went to college at California State University, Northridge (CSUN) he saw, for the first time, the diversity within the Deaf community. He suffered some “culture shock”. He made some good friends (who are his friends to this day), and they became his window to the “Deaf world”. When he went to Deaf Expo in Las Vegas, he saw more than 30,000 Deaf people. Then he met the Deaflympics athletes in Park City, Utah and the Deaf snowboarders in Finland. He became immersed in the Deaf Culture and found his identity as a Deaf person.

Sean is now a husband and father. He is shown in the picture above with his wife, Cheryl, their daughter, Ivy, and the sonogram picture of their second child, who is expected in March! Sean is going to school to become a teacher of the Deaf. His goal is to teach children about their Deaf identity at an early age. He does not believe children should focus on one modality. He would like to see children become bilingual - able to sign well, and be able to speak, too - to be able to move easily between the Deaf and hearing worlds.

So, that’s Sean’s story, and I hope you read to the end, because it’s an amazing story of passion, perseverance, and love.